Recently I met an inspiring individual, Liz Birnbaum, in the midst of the ecological farming movement. Liz began as a guerilla gardener, establishing a small organic farm at at her alma mater. In her current position as the Program Coordinator for the Ecological Farming Association (EcoFarm) Liz connects constantly with big movers and shakers in the ecological farming movement. Naturally, I wanted to know what makes Liz passionate about her work – what does ecological agriculture mean to her? Below is a mini interview Liz undertook to give us insight into their inspirations. Enjoy! 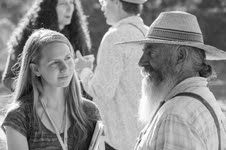 What does ecological agriculture mean to you?

Ecology is the study of relationships. To me, ecological agriculture is based on a point of confluence: it joins nature’s ecology and human’s agriculture. It evokes the concepts of farming with nature, harmony, and biodiversity rather than slash-and-burn monocultures. Ecological agriculture is not about just using something up or making it work for one person/being, it is about a give and take. It is about a balance.

Ecological agriculture also invokes a concept of place-based learning—the kind of experiential knowledge one can only get from walking the land and paying keen attention to the forces at work. Ecological agriculture is much more than just concept. It is a practice. It includes a community-based model of learning that promotes ethics, principles, and methods for farming in harmony with nature.

At the Ecological Farming Association, where I am currently employed, a primary aspect of our mission is to educate farmers about ecological agriculture. For 33 years we have been hosting the Ecological Farming Conference, better known as EcoFarm, which last year had 75 workshops and discussion group sessions where farmers, ranchers, food handlers, distributors, and others came together to learn about the cutting edge topics in ecological agriculture.

Ecological agriculture is an umbrella term for permaculture, biodynamics, agroecology, integrated pest management, organics, and more. Looking at EcoFarm’s workshop content is a good way to get a sense of how diverse the term ecological agriculture really is. We had workshops on seed saving, attracting pollinators to the farm, on-farm water stewardship, pastured poultry, food hubs, draft animals, farm finance, growing local grains, and much more at the 2013 EcoFarm Conference.

How and why did you get involved in the ecological agriculture movement?

I first got involved because I saw a need in my community to have critical conversations about sustainability. Since everyone eats and food is the great equalizer, I felt that food was the best place to start talking about the environment so that the discussion would include everyone. So, I became a farmer. I had next-to no experience in growing at the time, but I promoted the idea of a campus farm and the college community from student government to the board of trustees gave me tremendous support to start the farm. It was an incredible first season, from getting the fence up to laying out the beds to staking my first tomatoes. When I tasted the bounty of that first season and I saw how it brought the community together, I was hooked.

I worked to get the food we grew into the campus cafeteria to make sure the whole community could access it. I also set up a way to financially sustain the project by having many events and classes in the garden, including weekly on-site “harvests” where faculty and staff could come to buy fresh fruits and vegetables from the four awesome student interns and myself. I managed the farm for two seasons.

Food became an intellectual obsession, to put it mildly. I began to realize how much food was connected to everything I cared about—art, communities, social justice, health, the environment, etc. I felt like I could explore it forever. So I helped create and co-teach some courses: Biodiversity and Agriculture, Botanical Imperialism, and Chicago: The Food City. All of these had food and farming as a central theme. And that is how I got involved in this whole movement!

How has your commitment to ecological agriculture changed your life or your lifestyle?

Well, I have moved to California! I am from Chicago and now I am living in Santa Cruz which is nestled in an agricultural area.

I have gotten so many awesome freebies through the wonderful community of food producers out here, so I am eating well. I also think so much more about what I eat and how to prepare it. I have also gotten really into food crafts like preserving and foraging and blogging about it all .

If you were on a bus trying to convince someone to see the value in ecological agriculture, what are the 3 most important points you would want to express?

Earth—Look 7 generations ahead at the earth. How can you leave it better than you found it. I think that farming ecologically is a part of the answer.

Economy—Support a “know your food, know your farmer” system, not a faceless system.

Respect—Respect all life, don’t have a “winner takes all” attitude with the rest of the plants, animals, and fungi on this earth.

All that said, I am not the kind of person who will be judgmental of someone who eats McDonalds or eats from an anonomous food producer. I am the kind of person who wants to make a change so that those options either do not exist as they do (the cheapest and most plentiful things around for so many people), or they are made more sustainable somehow. I think everyone comes from different places with this and socioeconomics dictates so much.

If you could only eat one vegetable for 6 months, what would it be and why?

Probably onions. Is that a weird response? It might sound funny, but I eat onions in just about any dish for any meal of the day. The only hesitation I would have about this choice would be the lack of vitamins, which might have made me move to a brassica, but since I am from Chicago (named after the wild onion), I just had to go with onions. They are just so versatile and tasty! And they store so well. Yay for onions!

Our Philosophy: Our view of Ecological Agricultural Development

What Does Ecological Agriculture Mean To You?: From Raul in Choquecancha

All in a Chard Day's Work-Nikki Waxman SGP Week 1

AASD Photo Of The Week

The AASD is a registered U.S. 501(c)3, which means your donation is tax deductible. If you have any questions or concerns about the donation process, please email us at TheAndeanAlliance@gmail.com.

1. Select the monthly amount from the dropdown menu. 2. Click "Become a Friend of the AASD". 3. Follow the steps as directed by PayPal.

Follow Me!
The Superb Potato: Origins and the Rise of the West Photo Of The Week: Fresh Eggs!
Scroll to top