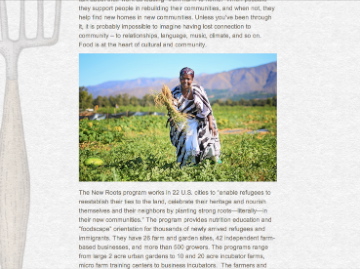 Seed saving is a hot topic around the world. Growers and consumers alike are rebelling against the seed monopoly that comes hand in hand with industrial agriculture. They are rejecting the role of genetically modified seeds that require agrochemicals to properly propagate. The biggest qualm centers on the idea of the terminator gene found in many modified seeds sold by big agriculture companies such as Monsanto, Cargill, and Dupont. Growers are unable to save seeds from such seeds, as they are genetically modified in such a way that the next generation of seeds will not produce. The debate over the ethics of such a seed is nothing new. But as more and more people across the world turn to an alternative agriculture path, supporting food systems that are ecological and healthy both for humans and the environment, they too have begun to speak up more about control over seeds. The movement is well underway to promote open-pollinated varieties  to foster seed saving and seed exchanges. That’s why the new Community Seed Toolkit, a joint undertaking by Vandana Shiva‘s organization, Seed Matters and the International Recue Committee’s New Roots program, is worth checking out. It makes it easier than ever to share and create a thriving seed exchange in your own community. Pretty exciting!

Off the Beaten Track: Beeswax Candle Making
Thinking Locally: Team Peru Explores Markets for Ecological Products
Technically Speaking: Grow Your Soil
The Monterey Institute of International Studies and the AASD: Taking steps to create change in Peru
The Superb Potato: Origins and the Rise of the West
What Does Ecological Agriculture Mean to You?
Technically Speaking: Ruben Teaching Close Spaced Planting
Photo of The Week
0 replies

The AASD is a registered U.S. 501(c)3, which means your donation is tax deductible. If you have any questions or concerns about the donation process, please email us at info@alianzaandina.org.

1. Select the monthly amount from the dropdown menu. 2. Click "Become a Friend of the AASD". 3. Follow the steps as directed by PayPal.
Our Philosophy:Effective Mentorship Photo of the Week: Traditional and Modern
Scroll to top